Foosball is one of the most enjoyable table games that you can play. Whether you go to your friend’s house or go to a sports bar, foosball can be enjoyed if you’re with a friend. Of course, you have to know how to play foosball first. Once you know the rules and the techniques, you’re good to go. To help you out, we’ve made a short and easy-to-read foosball guide that you can easily follow. That way, you’ll learn the rules of the game and the various moves to make in no time.

How to Play Foosball: The Game

If it’s your first time seeing a foosball table, you’ll notice that there are 8 foosball rods. These are the rods that you’ll use to move the men on the rods. Basically, the table is the field and the rods control the players. Each player gets control of 4 rods consisting of 13 players each. The objective of the game is to use the 13 figures to shoot the ball at your opponent’s goal side. Just think of it as a game of soccer but with a table. You win if you get 5 goals.

There are commonly three types of game formats with the singles game being the most common. The singles game consists of 2 players playing against each other. It’s the basic 1 on 1 game where each player controls all 4 rods. Another is the doubles game wherein there are 2 players per side. Usually, one player of a team controls the defensive and the other the offensive. The last format is the goalie war wherein a player only uses the defense rods at the leftmost sides.

As you can see, foosball can also be a team game as it is a 1 vs 1 game. Overall, it’s a great bonding experience between friends and family. So if you’re asking yourself, “Why play foosball in the first place?” well, it’s a great way to spend time with people.

Now that you know about the basics of foosball, let’s go on to the rules. Let’s break down the rules step by step so it’s easy to follow:

First, you flip a coin to see who serves first. In the succeeding serves, the team who lost the goal will get to serve after the goal. In the event that the ball is out of the table or gets stuck in the middle, the team that serves as the one that lost the goal most recently.

Once the ball flies off the table or gets stuck without any player able to hit or clear it, then the game stops. The ball is then given to the designated team for the serve. The game also stops once one team gets 5 goals. 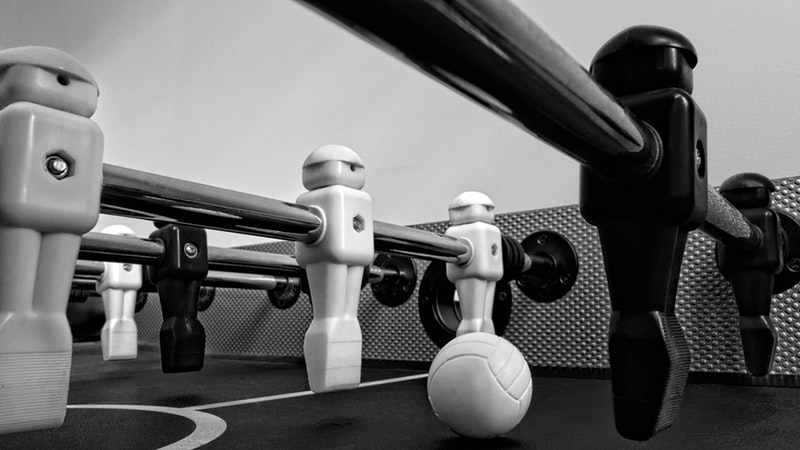 By now, you’re probably thinking that foosball is all just about hitting and blocking the ball. This is true to an extent, but there are a lot of techniques to do that. Let’s go through some of them in this section.

Other than catching, you need to know how to shoot the ball. We’ll mention a few basic shots to learn:

Let the ball go over to the middleman of the 3-bar and push the ball forward to the goal.

Let one of your 3-bar players hit the ball diagonally so it can enter the opponent’s goal at an angle.

Hit the ball in a diagonal direction but straight to the goal instead of hitting the wall.

These are some of the basic techniques to learn if you are a beginner.

As you can see, foosball is a really fun game that everyone can play– and it’s not so hard to learn either. All you have to do is know all about the parts of the table, the rules of the game, and some techniques. Once you know how to play foosball, you’re ready for your first game.

Why And How to Play Fantasy Kabaddi?

Over the last decade, Kabaddi has come a long way in India; especially post the announceme…