NDA 2017 SYLLABUS is officially announced by the examination authority and released through the official notification.NDA 2017 (National Defence Academy) is a top institute that trains the cadets to get selected for Indian Armed Forces (Indian Army, Indian Air Force, and Indian Navy) as officers. UPSC – Union Public Service Commission conducts NDA & NA Examination..NDA (I) 2017 will be organized on 23rd April 2017 and NDA (II) 2017 will be organized on 10th September 2017.The topic wise nda syllabus 2017 is mentioned in this article. 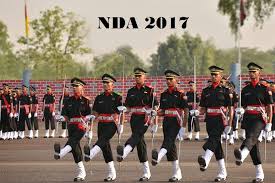 The NDA syllabus has been divided into two sections Mathematics and General Ability Test. The General Ability Test section will contain topics such as English, General Knowledge, Physics, Chemistry, General Science, Geography and Current Events. These topics are mentioned based on the previous year examination analysis.

Algebra: Complex numbers – basic properties, modulus, argument, cube roots of unity, Conversion of a number in decimal system to binary system and vice-versa, Arithmetic, Geometric and Harmonic progressions, Solution of linear inequations of two variables by graphs, Binomial theorem and its application, Representation of real numbers on a line, Binary system of numbers, Quadratic equations with real coefficients, Permutation and Combination, Logarithms and their applications.

Matrices and Determinants: Types of Matrices, Determinant of a matrix, adjoint and inverse of a square matrix,  operations on matrices, basic properties of a determinant, Applications – Solution of a system of linear equations in two or three unknowns by Cramer’s rule and by Matrix Method.

Analytical Geometry of two and three dimensions: Distance formula, Angle between two lines, Equation of a circle in standard and in general form, Ellipse and hyperbola, Rectangular Cartesian Coordinate system, Equation of a line in various forms, Distance of a point from a line, Standard forms of parabola, Eccentricity and axis of a conic.

Basis of Life – Cells, Protoplasms and Tissues, Elementary knowledge of human Body and its important organs, Food – Source of Energy for man, Constituents of food, Balanced Diet, Achievements of Eminent Scientists, Difference between the living and non-living, Growth and Reproduction in Plants and Animals, Common Epidemics, their causes and prevention, The Solar System – Meteors and Comets, Eclipses.

Origin of Earth, Rocks, and their classification; Weathering – Mechanical and Chemical, Earthquakes and volcanoes, Atmosphere and its composition; Temperature and Atmospheric Pressure, Planetary Winds, cyclones and Anti-cyclones; Humidity; Condensation and Precipitation; Types of Climate. Major Natural regions of the World, Important Sea ports and main sea, land, and air routes of India. Main items of Imports and Exports of India, The Earth, its shape, and size. Latitudes and Longitudes, Concept of time, International Date Line, Movements of Earth and their effects, Ocean Currents and Tides, Regional Geography of India – Climate, Natural vegetation. Mineral and Power resources; location and distribution of agricultural and industrial activities.

Current important world events, Knowledge of Important events that have happened in India in the recent years, prominent personalities – both Indian and International including those connected with cultural activities and sports.

All the above-mentioned topics are released in the official notification and the majority of the questions are covered from these topics.

Stay Tuned to geek-week.net for the latest updates on NDA 2017.